Celebrating the life of Angus McIntosh

Easter means many things to many people; to most it means some focus on family. Recently, MoreDirt and the South West scene lost a big piece of its family and thus gathered in the rain and mud of a typical Easter Sunday to celebrate the life of Angus McIntosh. 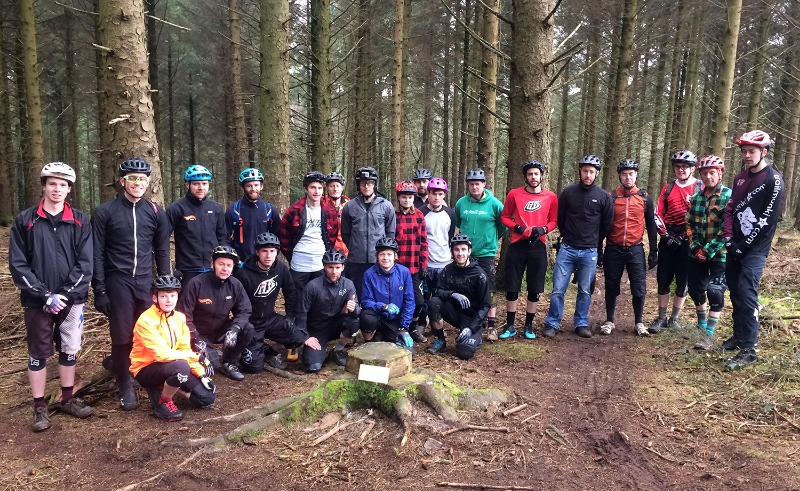 40+ riders travelled from across the South West to be part of the Memorial Ride.

The aim was for a memorial run down Angus' favourite trail and to remember the overwhelming positivity of an individual who touched so many lives and whom had a true love of all things two wheeled. Angus' parents were present in the Teign Valley to lay some of his ashes at the trail head that provided him with so much joy and to ensure that he will always be out there with his friends in the place he loved. Time to share those stories and memories with Angus' parents.

I first met Angus when he approached me to work at MoreDirt, initially as an apprentice and then a full-time employee. It was immediately clear how much he loved cycling and how passionate he was for the sport. His enthusiasm was infectious and he drove my own passion for the site and riding. As he developed with MoreDirt his kit tests, race coverage and photography gained respect from friends and throughout the industry. He undoubtedly helped MoreDirt to grow and with it he did too, amassing an encyclopaedic knowledge of mountain biking. It was only really at Angus' funeral I truly understood what MoreDirt meant to him from talking to the huge crowd who attended. It was humbling and emotional to feel like a website gave him a job he loved so much. I will always cherish the countless road trips to races and events over three years we worked together. Angus fully committed at the Forest of Dean for the Mini Downhill Series.

But Angus was so much more than just a great employee and friend; he was an inspiration to those whose lives he touched. Angus suffered from Cystic Fibrosis and anyone who has had any contact with the affliction will know that undertaking any physical activity can be a challenge and that those weakened lungs are susceptible to viruses and bacteria we shake off and take for granted. But Angus had the heart of a lion, it was like he knew every second of the day that he was on the clock and he squeezed every drop out of everything he did in life. To see a photo of Angus riding is to instantly identify an individual who looked pinned and fast, even in a still image. He rode with a commitment and unbridled joy that is rarely seen on the trails. Often we would see him tear off ahead of us, only to find him in a giggling heap with his bike hanging from a tree, having found his limits…of grip…and of fun. Setting up for a photo shoot on Dartmoor.

He was however an inspiration because he never ever gave up. He bought his first DH bike and fell ill and never really had chance to ride it, but he didn't give up. He fought his way back to health and rode the RideLondon event, a bike ride which takes the best out of a good rider. He did it knowing the risks, but because he believed life was for living. One of my last rides with Angus was on his new E-Bike which briefly got him back on the trails, a great moment and one which put that big smile back on his face.

There are many riders out there who met Angus and were infected with his enthusiasm and many who will remember him at the top of trailheads all over the country, trying in some small way to find his level of commitment, speed and fun. Gone but not forgotten, Ride in Peace.