Chicksands in Bedfordshire is one of Britain's original 4X tracks. After a sabbatical, it is great to have the venue back on the calendar. This fast, flowing track is great for riders and spectators. With fun jumps, high berms and split lines on the track, racing is always amazing and on Sunday it was no different. 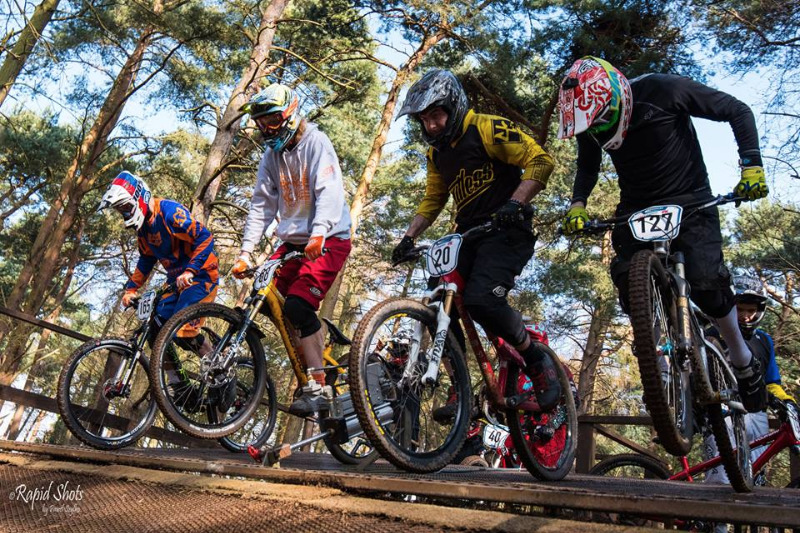 The weekend began on Saturday. Loads of riders were on track and having a blast getting their lines dialled. Gate practice ran smoothly and it was great to see the riders in all their new kit and plenty of new 4X bikes ready for the season ahead.

As always, Saturday night was all about BBQ's, fun and talk about the race on Sunday. A little pump track action and the odd backflip on the dirt jumps! With weather forecasts all week saying that a sunny weekend was in store, it was great to wake up on Sunday morning and see the sun shining! The Schwalbe banners were in place, riders had walked the track and it was time to get the show on the road.

Practice was underway at 09.30 and and all the riders got into the track. The 'S' bends are the main passing place at Chicksands so you could see riders starting to look at lines in those turns especially, but also using insides on several other turns. The sandy surface was catching a few riders out,  but by the time the motos rolled around, the riders were pinning it. The track was riding better than ever and we were all set for an amazing days racing.

A great turn out of women was good to see, loads of vets and masters and great numbers for the younger categories - youth, juvenile and junior. There were also plenty of new faces in elite all looking to take Duncan Ferris's number 1 plate away. Nathan Parsons was looking good as were the Hudson brothers so it was interesting to see what would happen in Elites. Motos kicked off at 12.30. 3 qualifying races for each rider to whittle each category down to the knockout stages which would be held later in the day.

There were standouts in the motos in all categories. In elite men Nathan Parsons was looking on the money, Duncan Ferris, Connor Hudson and Richard Swales were all riding well and all bets were off heading to the semi finals.

Natasha Bradley was flying in elite women, winning her motos but it was great to see so many junior women challenging the senior women in every moto. Megan Wherry was on it and looked like challenging Natasha all day. Hannah Escott and Ellie Dewdney were also riding well. So it was onto the finals. In Big Fun Ben Tripp took the win from Ali Dunn and James Dalleywater. In the awesome rippers class Tyler Partridge won ahead of George Madley and Adam Barrass.

Will Mills took the win in Juvenile from Rhys Mahon and Rubén Masi. In Youth Declan Willicombe looked good all day and secured the win from Tom Bell and Oscar Powell.

In Juniors Kyryll Burkynskyy rode convincingly to win ahead of Stuart Burrows and Finn Chapman. The Seniors and it was great to see Tom Burch riding well and here he took the win ahead of Alistar Keen and Mathew Wilson.

Onto the masters and these guys are always battling! At round 1 it was David Sibley from Dave Jacquin and Joe Kennedy.

A great entry of vets and some awesome racing all day. Jason Jessop grabbed the win from Dom Bent and Phillip Gray

Onto the women's final. Natasha Bradley got the holeshot and in turn 2 looked like she was away. However Megan Wherry and Hannah Escott had other ideas they both dived inside on turn 2. It all got close but Natasha was able to hold the lead. The race held to the finish line with Natasha winning, Megan 2nd, Hannah 3rd. In her first ever British 4X race Ellie Dewdney rode well to finish 4th.

The Elite men lined up for the final. Connor Hudson, Nathan Parsons, Richard Swales and Aaron Dalleywater. Connor got the holeshot, but on the exit of turn 2, the others were close. Nathan and Aaron came together and unfortunately Aaron slid out. Connor was clear out front and took his first ever British 4X Elite win. Richard was 2nd, Nathan 3rd and Aaron 4th.

Thanks to the series sponsors Schwalbe, all marshals, medics, volunteers and riders who help to make it all possible.

The next event for the Schwalbe British 4X Series will be on April 30th, at Afan in South Wales at the legendary 4X track.