Last weekend saw the start of the One Industries Mini Enduro series at Haldon Forest, near Exeter in Devon, in some very uncharacteristic winter sunshine. 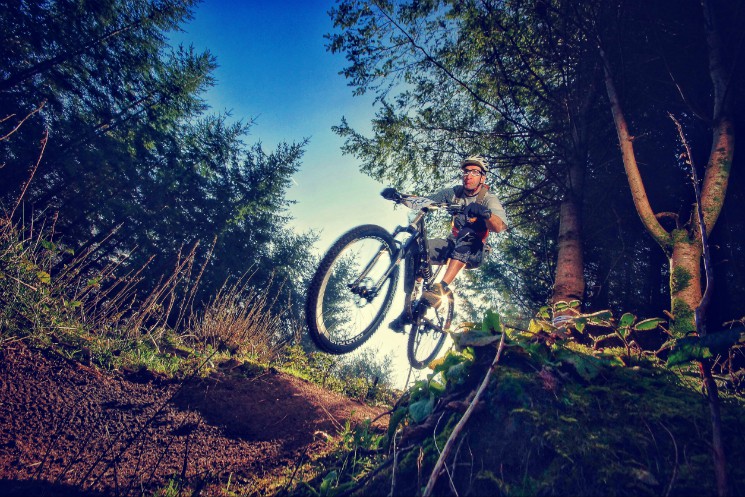 For some (including myself) it would be the first Enduro race of the season; for others it wouldn’t; after the Night enduro at Llandegla the week before & the Circus of Dirt events down at Newnham. This however would be the first sunshine fuelled event and it really showed in the both the turnout as well as the atmosphere around the trail centre!

The winter storms had pretty much decimated the forest and in the lead up to the race a lot of people were wondering how they could be running an event up there with so many trees down. Only four days beforehand all three of the stages used last year had numerous trees down on them and apart from the Instagram photos that organiser Chris Roberts had posted of ‘Cafeside’ on the opposite side of the hill, no one had a clue what they’d be racing on! Massive thanks have to go to the Forest ranger Tim & his crew for working wonders on the hillside to prep it in time.

So race day wasn’t until Sunday but with the crew there setting up, marking out the courses & generally getting ready, a large number of riders made the trip down to get a bit of Saturday practice in. The usual three stage format was bumped up to four stages by having stage one repeated at the end, giving everyone a bit more time in the saddle along with more chance to gain or lose time, whichever way you want to look at it.

Stage one saw an almost identical top half to last years first stage, starting by the quarry and weaving through a twisty, rooty singletrack before popping through a ditch and out into a more open bit of woodland. This more open area widened the track up a bit, making for a lot of line choices round the root filled. The bottom section had to be changed because of the amount of trees down on the black run as well as the off-piste that linked them, so the last 50 seconds took you onto the red ‘Ridge trail’ for an all out pedal down the grey ribbon of hardpack gravel. With rocks at the side ready to grab your pedals and a few jumps for those going fast enough, it turned out to be a good, fun choice. Stage two saw you follow the red trail up to the road which you then followed for a mile and a half to the other, more DH & freeride orientated side of the hill. Stage two, a favourite amongst a lot of the riders, saw a flat out pedal straight down through some root infested trees before crossing a fire road and dropping into the mid section. What used to be a small rocky chute had lost most of the small rocks from all the wheels it had seen, just leaving a few of the bigger rocks sticking out but a tight line into it made it tricky to keep it pinned. Flying round some nice bermed turns and over a few small jumps you crossed another fire road and hit a freshly cut piece of track that cut out a vertical drop which had been deemed to be a little too extreme for some. The last section was a flat out charge again round some nice berms, through some rough rutted straights and over a fallen tree into the finish.

Stage three was exactly the same as the second stage from last year apart from an extra motorway-style pedalathon at the top. This gave you a load of extra speed into the top rooty section, in turn making it a bit more fun as well as a bit trickier. Locals will know the next section as steepy, canyon of death or rutterdam and by those names you can probably tell that it drops you into a steep three-foot deep gully. If you weren’t careful you could easily clip a pedal, which would spell disaster in anyone’s books. The final part saw you spit out across a rooty, rocky straight and into the last spin of the cranks, round a few turns, over a little tabletop, before the finish. 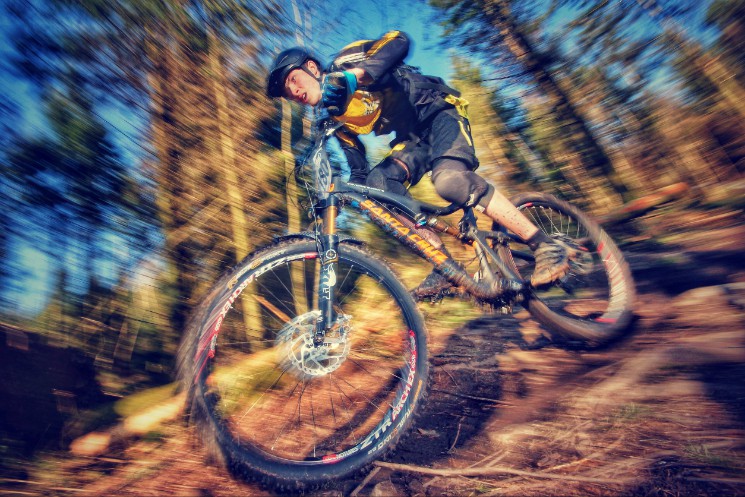 Race day saw most people doing a full loop in the morning to sus out all of the stages before the timed runs. However for those who had done that the day before it was chance to check out the bits that time to could be made or lost on as well as check out how the lines were riding in. For Pat Campbell- Jenner, Tom Gethin & I, that meant spending a lot of time dialling in some of the trickier rooty corners on stage one that if you weren’t careful could stall you. There was also controversy over the cut line that initially the BC commissaire said was legitimate but once brought to the attention of Chris Roberts it was taped off so getting the line through a particularly tight pair of trees was really important.

Everyone seemed psyched for their runs whether they were there gunning for the podium or just there for a bit of a laugh. The sun was shining and there was hardly a wet patch on course! In the usual fashion the Pro/Am category went first, followed by Senior, Masters, Vets, Super Veterans, Open & Women. 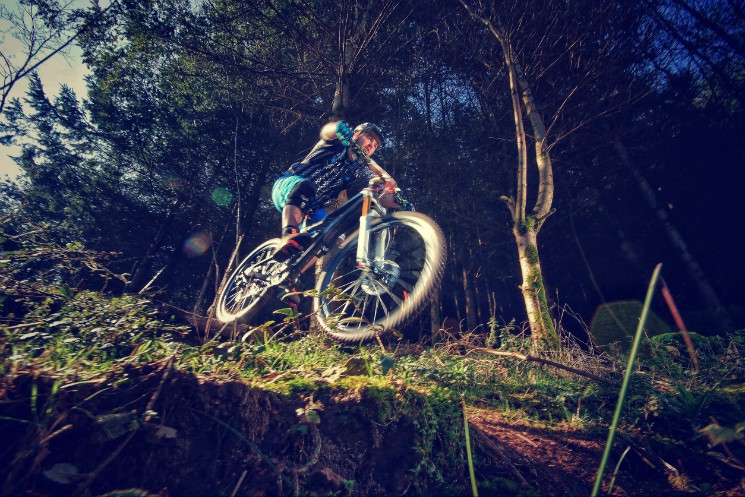 The women’s category saw local lass Laura Griffiths take third place behind Rosie Wilson in second. It was a comprehensive win for Rachel Gurney though taking it by over thirty seconds! The hardtail category was pretty full, which wasn’t surprising with Haldon not being the gnarliest of venues. The podium saw James Peters in third, Zealous Bike Co.’s Paul Mackie in second but taking top spot was Sam Acland. The super veteran class had Lars Jones in third, Tony Hicks taking second but sealing the deal for top spot was Clayton Cars’ Pip Sowden.

The veteran class saw riders from all over the country make the trip down to Haldon, but gracing the podium were Graham Sheldon in third, Andy Sadler in second and Richard Webster in first. Second largest category of the day was Masters, with 53 riders competing, and as we saw last season the masters may be a bit older but they certainly aren’t slouches. Russel Turner put in a good ride for third spot but it was the powerful new Intense/BadAssBikes/One Industries team that took the top two places. Joe Finney showed that he isn’t about to slow up, taking second place just one second behind his team mate Andrew Titley who snatched the top step. 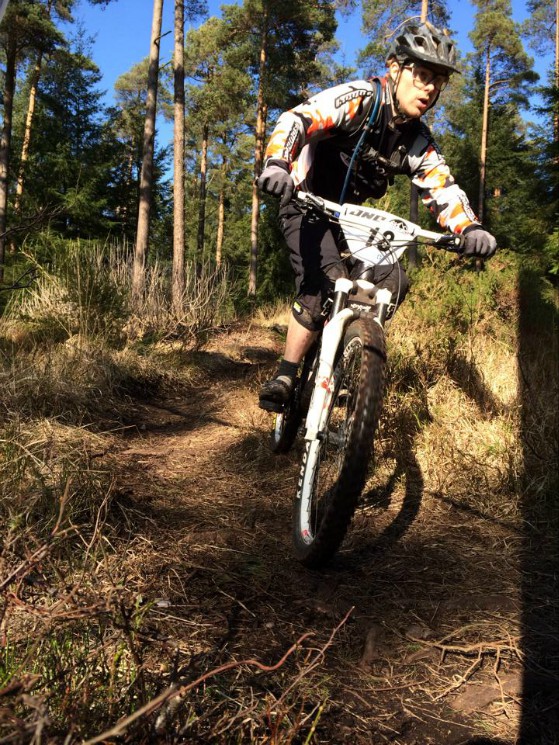 The open category was in place of youth and junior so had all riders aged between of 13 & 19. Very closely fought, there was only 1.7 seconds between first and third with Joe Harrison taking the third place. In second was Leigh Johnson from Swansea, recently picked to ride on the UK Enduro scholarship team. However just pipping him to the top spot by 0.4 secs was Steve Peat Syndicate’s new signing Vini Crighton-Poli.

Pro/Am had a field of just 8 riders, again making the trip from all around the country. Bike Park Wales’ new team member Leon Rosser had enough pace on the day to take him into third place in his new team colours but a whole 10 seconds behind the top two spots. Second place went to Robert Williams riding for the newly announced WTB enduro team who lost out by 0.7 seconds to Rowan Sorrell, also riding for the newly formed Bike Park Wales team. Rowan, more known for his downhill racing came and smashed the place to bits, showing that flat-pedalled riders can still be up in the mix at enduro events.

The largest group of the day with 55 riders in it was the senior category. For 2014 the senior category had the extra kudos of becoming the Trailhead series; an overall series sponsored by the Trailhead bike shop in Shrewsbury. With a lot of local south west names trying to use their local knowledge to their advantage it was really going to show who had been putting in the training hours over the winter. Local boy Tom Dunn had been flying all weekend upon his new S-Works 29er but a crash on stage one put him out of contention when he had to get the allen keys out to straighten his bars before getting back on course. (Although big respect to him for slaying stage 3 and taking the fastest time in senior by a clear couple of seconds!) In the end it was DeltaBikes’ Paul Pickup making the trip from Gloucester who rode to third place with some consistently good times. Second place went to Mojo’s Joe Taylor; time after time one of the fastest senior riders around last year, who took an unlucky spill on stage two that probably lost it for him. But to my amazement and good luck of staying rubber side down it was me that managed to scoop the top spot for Marzocchi/SouthforkRacing.co.uk by 2.4 seconds.

And so the podiums were done and it was time to head home. Everyone seemed to have loved the first round of the One Industries Mini Enduro and even without the factory team presence of Atherton racing that we had there the previous year there had been such a positive buzz that was only heightened by the great weather. Yet again Chris and his team alongside the guys from One Industries had put on an excellent event leaving everyone to head home with smiles on their faces as well as great anticipation for Round 2 at the Forest of Dean on the 27th of April.

Many thanks to Chris Davison and Amanda Seal for the photos. To view Chris's full gallery of the event, head over to Roots and Rain.

Haldon Forest mountain bike trails located near Exeter in Devon features a skills area and range of bike trails around the forest suitable for all abilities.