The final day of the 2018 UCI Mountain Bike World Championships presented by Mercedes-Benz once again saw twenty thousand spectators heading to Lenzerheide, raising the total number of fans attending the races to 65,000. Following the Cross-Country races of the previous days, Sunday was all about Downhill and track that challenged the riders with dusty, slippery and loose conditions. Much to the delight of the thousands of Swiss fans lining the track, EWS mainstay Caro Gehrig set a fast time early, which held until fellow Swiss rider Janine Hübscher managed to push Gehrig out of the hot seat. The Swiss duo in first and second then watched on as the next four women all failed to come close to a podium spot. It wasn’t until 2012 UCI World Champion Morgane Charre took to the track, that Hübscher and Gehrig started to shift around nervously on the hot seat. Charre showed a brilliant run and crossed the finish line over five seconds quicker to take over the lead.

The Top 10 ranked riders got underway with a fast start by the Queen of Enduro, Cecile Ravanel (FRA), but a front flat halfway down the track ruined the chances of the medal favorite. Following Ravanel and spurred on by the frantic local fans, Swiss powerhouse Emilie Siegenthaler lit up the track to take over the hot seat. Siegenthaler nervously watched on as both Katy Curd (GBR) and Eleonora Farina (ITA) failed to come close to her time but then Marine Cabirou’s (FRA) splits started showing green. Cabirou eventually crossed the line over 4.5 seconds ahead of Siegenthaler. 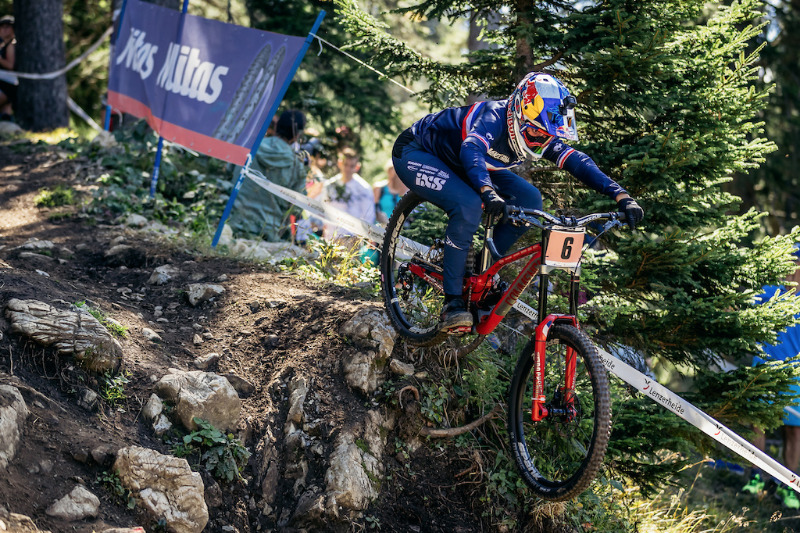 Entering the Top 5, all eyes were on the two Brits Rachel Atherton and Tahnée Seagrave, who had dominated much of the UCI World Cup season. But before it came to the British showdown, 2017 UCI World Cup overall winner Myriam Nicole (FRA), proved that she was truly back from her injury and not to be counted out by besting Cabirou’s already fast time by another five seconds. Following Nicole, Tracey Hannah (AUS) wasn’t able to put down the run she wanted to and slid behind the French duo. With the crowds attention moving to the two Brits left at the top, Tahnée Seagrave made quick work of the top section including the demanding Graubünden Rock Garden. The young Brit was over a second ahead at the first two splits but started to loose time and fall behind Nicole in the middle of the track. A strong few corners and jumps before the finish line however saw Seagrave crossing the line 0,6 seconds ahead of Nicole with only Rachel Atherton left at the top. 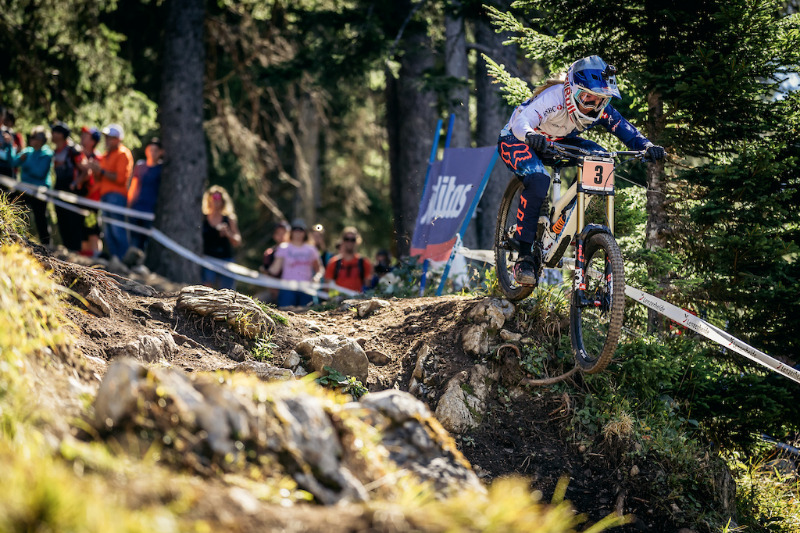 The 2018 UCI World Cup champion blasted through the first turns and demanding rock garden visibly quicker than any women before her and stunned the spectators with a first split time that was an unbelievable three seconds faster than Seagrave. Rachel however wasn’t done yet and continued to blast down the course, increasing her lead sector after sector until she crossed the line a massive 9.8 seconds ahead of Seagrave to take her fifth UCI Rainbow Jersey.

“I was really nervous going into this week. After watching practice and seeing Tahnée and Myriam riding so fast, I knew that it was going to be an extremely fast race. I was honestly blown away by how fast these two were riding. I knew that I really had to push it, all or nothing. You can either win or crash and either is ok because it’s the World Championships, so I just laid it all out there. I got a bit sketchy but luckily it worked out this time.” 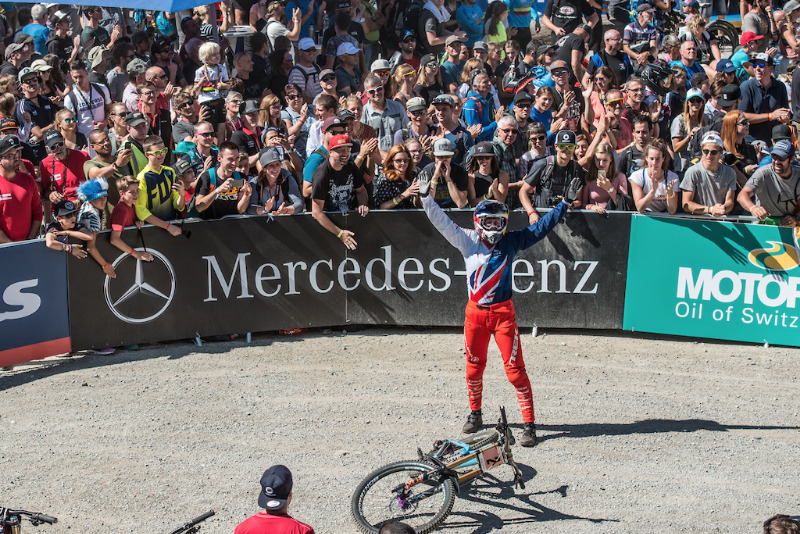 Just like in the women’s field and much to the delight of the fans lining the track, the beginning of the men’s race saw a Swiss rider sitting on the hot seat. It was however clear that Lutz Weber’s time would not hold long and soon after, Jackson Frew (AUS) took over the top spot. Frew didn’t get to enjoy the hot seat for long as just a few riders later, three time UCI World Champion and UCI World Cup victory record holder, Greg Minnaar (RSA) left the start gate. True to form Minnaar, made quick work of the demanding track, crossing the line four seconds ahead of the Australian. Having just recovered from a broken arm, there were questions as to how fast Minnaar’s time really was. However, rider after rider struggled to get close to Minnaar’s time and it seemed like the strong late summer sun in Lenzerheide had dried out the track changing the conditions from damp and grippy to dusty, loose and slippery. 27 riders tried to challenge the South African’s time and failed, the 28th however didn’t. Martin Maes (BEL) left the start gate and looked to be on fire. The Belgian was ahead at every split and after an “amaesing” run, took the lead with 2.4 seconds to spare. Similar to the last UCI World Cup in La Bresse, where EWS-star Maes upset the Downhill world by taking the win, the Belgian had plenty of time to get comfortable in the hot seat. As Maes watched names like Eddie Masters (NZL), Dean Lucas (AUS), Remi Thierion (FRA), Jack Moir (AUS), Mark Wallace (CAN) and Connor Fearon (AUS), all failing to come close to his time the second huge upset by the Belgian within two weeks was in the air. It wasn’t until Aaron Gwin (USA) opened up for the Top 10 ranked riders, that any splits showed up green. 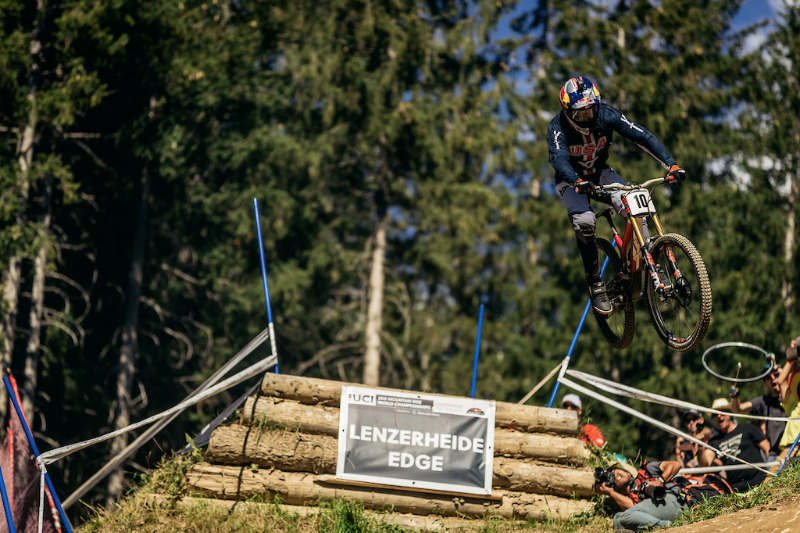 The five-time UCI World Cup overall winner was ahead by 0.4 seconds after the first two splits before a mistake in the challenging upper wood section ruined his chances of winning his first UCI Rainbow Jersey, eventually crossing the line in second place 1.1 seconds slower than the Belgian. Fellow American Luca Shaw (USA) and Laurie Greenland (GBR) both came close on several splits but eventually crossed the line behind the leading pair. With a huge upset seeming ever more likely, defending UCI World Champion Loic Bruni sprinted out of the start, having none of it. Blasting through the top sections Bruni raised eyebrows with splits that showed up green. Gaining and loosing time but always just barely ahead, Bruni railed the last few corners and dropped into the packed finish area to move into the hot seat a mere 0.2 seconds ahead of Maes. 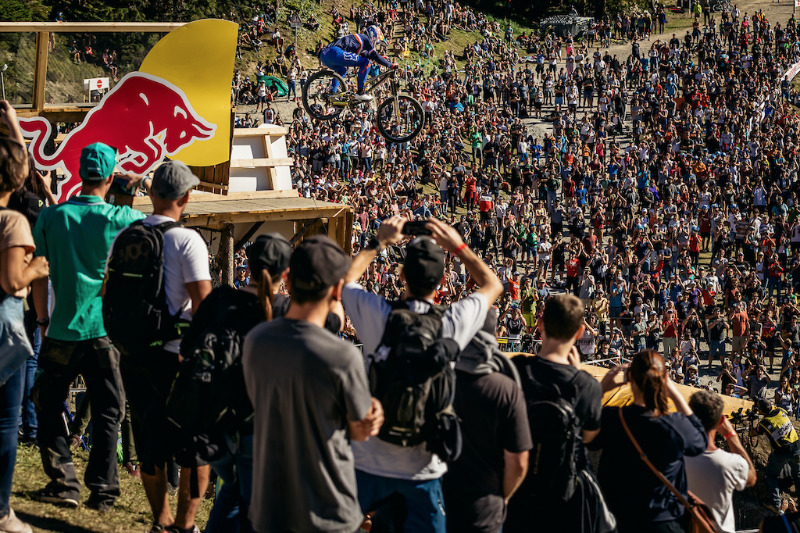 With four riders left at the top, the racing was however far from done. Loris Vergier (FRA) was up first and once again the splits showed green. Ahead by half a second, a small mistake saw Vergier briefly stalling, which was enough to derail his hopes to challenge Bruni. Up next two-time UCI World Champion Danny Hart (GBR) was on pace, even slightly ahead at the second split, but in the end crossed the line in thrid, 0.5 seconds down. Troy Brosnan (AUS) gave it his all but couldn’t threaten the podium, so all eyes went to the last rider on the hill, 2018 UCI World Cup overall winner Amaury Pierron (FRA). The Frenchman pushed hard. Too hard. As Pierron’s front-wheel washed out taking him with it, it was clear that Bruni had just successfully defended his title. Maes proved beyond a doubt that his win in La Bresse was anything but a fluke by taking silver, Danny Hart took bronze.

“The last few World Cups, that we had here all had pretty challenging dusty and slippery conditions. So I knew what to expect today. I didn’t want to repeat my mistakes from last year but felt like I was on the breaks a little bit too much in some turns to avoid slipping out. Overall the conditions were perfect today apart from some insanely dry sections that were quite surprising. I don’t think I defended my title, but instead I won a new one because there are so many fast riders right now. Loris is extremely fast and the times with Martin and Danny were super close. I think we showed the spectators a great race.” 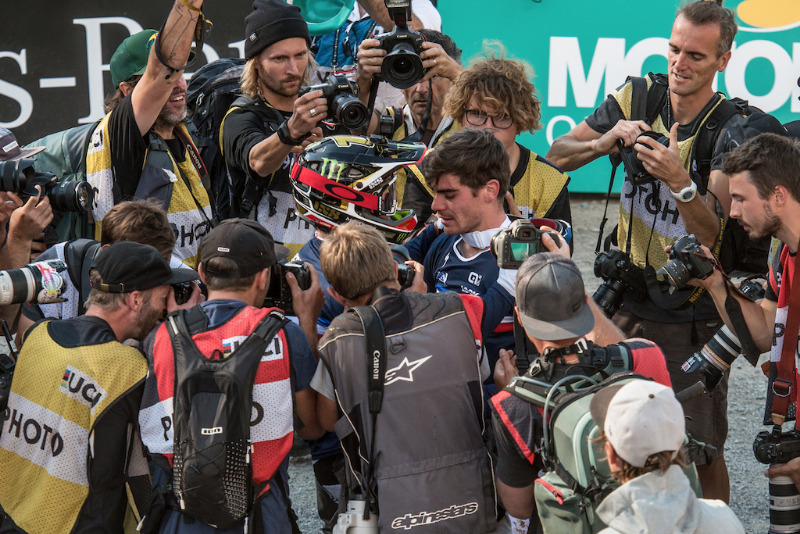 Earlier in the day, the up and coming generation of Downhill riders battled it out for the UCI Rainbow Jersey with Vali Höll (AUT) as the clear favorite in the Junior Women’s field. Having won every UCI World Cup in her category by big margins and times that would have placed her well into the Top 10 of the Elite field, anything but a victory for the young Austrian would have been a huge upset. With the Top 10 dropping in, it was Norwegian Mille Johnset who set the early pace, until Anna Newkirk (USA) showed what she was made off, sliding into the hot seat with a time that was six seconds faster than Johnset’s. All eyes were now at the top, where Höll made quick work of the demanding Graubünden Rock Garden, sped through the many turns and rooty forest sections, crossing the finish line over 10 seconds clear of Newkirk to win gold, the UCI Rainbow Jersey and to complete a perfect season in her first year as a Junior. 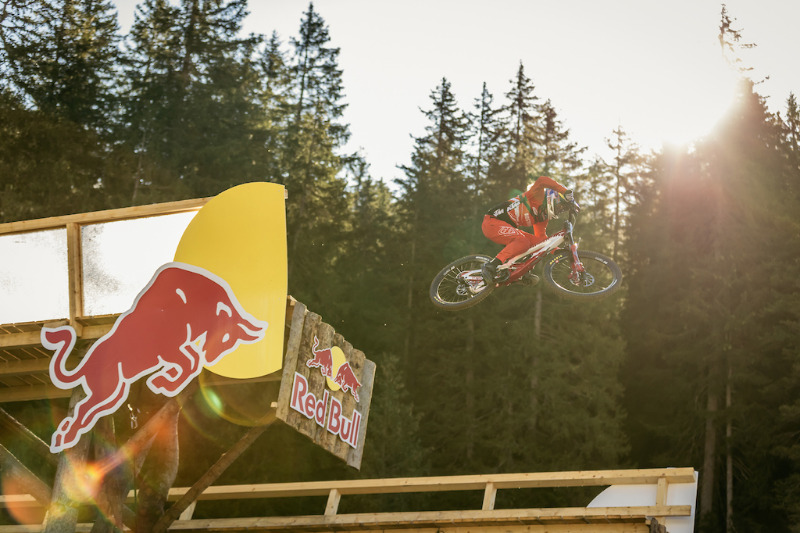 Based on the qualification times and the results from the UCI World Cup season, it looked like a five-horse race between Thibault Daprela (FRA), Henry Kerr (GBR), Kye A’hern (AUS), Kade Edwards (GBR) and Patrick Butler (AUS) in the Junior Men’s. Kerr, Butler and Daprela however all had costly mistakes in their race runs and were unable to challenge the Top 3. In the end it was Kade Edwards who, proving that his fast qualification time was no fluke, crossed the finish line fastest to win the UCI Rainbow Jersey in his last year as Junior. Kye A’hern took silver for Australia and Elliot Jamieson who was on a tear, improving his qualification time by a full 20 seconds, took bronze.

“I have never been this nervous in my life. I put myself under a lot pressure. After a perfect World Cup season, I’ve just been waiting for a mistake to happen but it never did. I am super happy. When we started the season in Losinj I was just hoping for podiums, now I am here. It’s crazy!”

“My run was sweet, it was just flat out I guess. I have been waiting for a run like that all season. I made a lot of mistakes this year. I kind of liked the track and the new section and yeah, it turned out well.“ 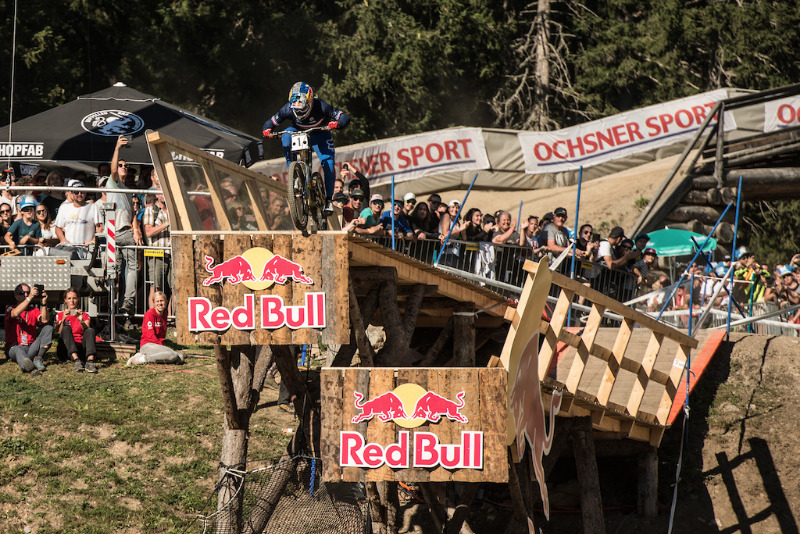 Over 65,000 Spectators and a lot of golden smiles “What a fantastic event. All of our expectations have been exceeded. We expected 30,000 spectators, in the end we had 65,000. Switzerland won several gold medals and the atmosphere on Saturday and Sunday was just incredible. I want to thank all of the athletes and spectators, who made this event unforgettable. A big thank you also goes to the many volunteers. The event wouldn’t have been possible without you.” 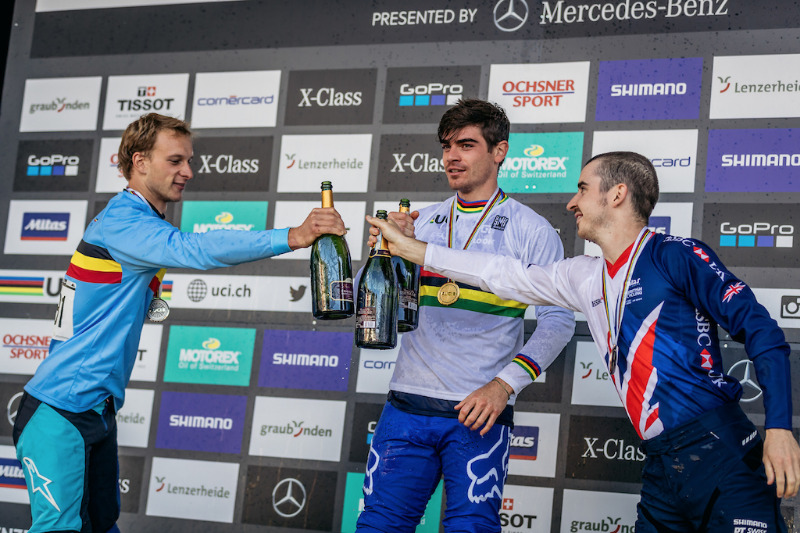