JBC Bikepark in Jablonec, Czech Republic was the host for round 3 of the 2016 4X ProTour. After 2 superb rounds already, it was time for the riders to take on the most challenging track on the 4X ProTour. Famed for the 'Marosi Wall ride pass'; this track has it all. Gap jump from the start, huge jumps, wooded section full of roots and rocks, wall ride and technical jumps that really catch the riders out. It is the ultimate 4X challenge and the venue for what was an amazing night of 4X racing. 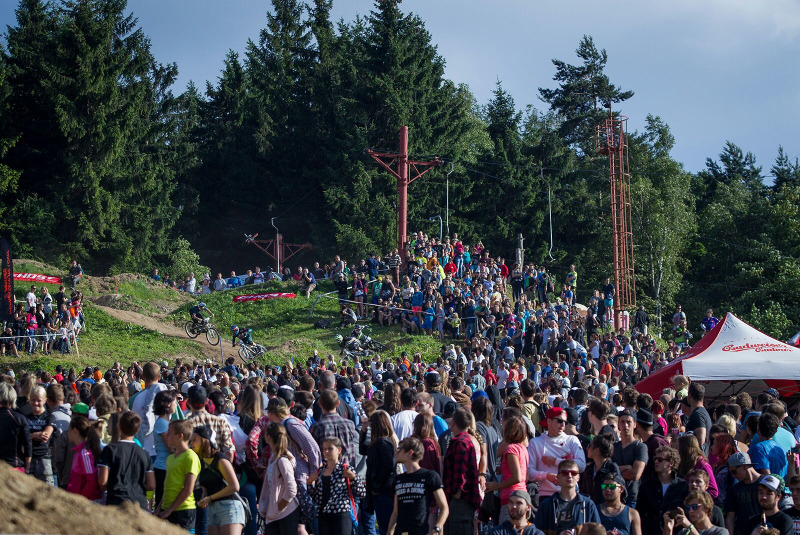 The event was scheduled to start on Thursday with practice. Unfortunately torrential rain all day meant that this session was cancelled and moved to an extended session on Friday. The track guys worked tirelessly throughout the night to get the track ready for practice on Friday and qualifying. On Thursday there was the opening ceremony in the centre of Jablonec town with the mayor giving out the number plates to the top ranked riders, along with interviews with them all in front of huge crowds. The atmosphere and expectation for the race was already bubbling with the locals, and it was great to see the whole city getting behind the event.

On Friday the practice session was extended to 3 hours to give the riders plenty of time to get to grips with this extremely challenging track. Throughout the session the track dried out and by the time qualifying rolled around the track was in great condition. 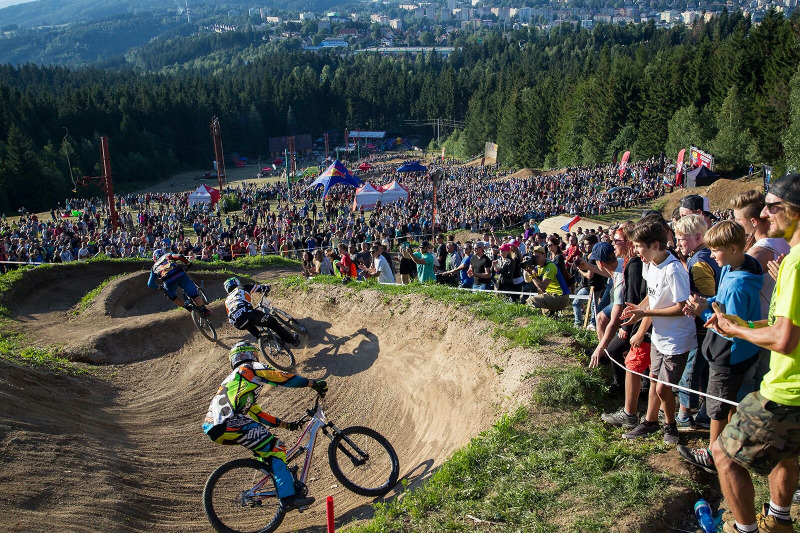 The women went first and it was 2015 4X ProTour champion Helene Fruhwirth set the fastest time ahead of Czech BMX star Romana Labounkova and British rider Natasha Bradley in 3rd. Next up it was the men. Running in reverse order to the UCI World rankings, the fastest riders qualified at the end. As each rider left the start, the times were getting quicker and quicker by the finish line. It was local hero and crowd favourite Tomas Slavik taking the fastest time ahead of Felix Beckeman and Hynek Strouha. The scene was set for an action packed race on Saturday night.

Saturday morning and thankfully the sun decided to make an appearance. The temperature was rising and the track was quickly drying. The final practice session started and the crowds were building. The crowds turned up in their thousands. At an estimate there were 10,000 passionate Czech 4X fans all with air horns, flags and whistles. There was a true party atmosphere and this was going to be a fantastic night of action. They we looking for hometown hero Tomas Slavik to take the victory, but would it be his night? First up, the top riders were introduced to the crowds. Fire, smoke and each rider's choice of music introduced them to the huge crowds. After the rider introductions, the first round of racing started at 18.00. In the first round there was a huge surprise with 3rd qualifier and former podium finisher Strouha went out after crashing on the lower section. Into the quarter finals and there were some huge shocks. Felix Beckeman, Simon Waldburger and Scott Beaumont all 3 who are fighting for the 2016 overall title went out.

By the semi finals it was getting really interesting. In the women's Natasha Bradley crashed out of an intense race which left Romana Labounkova and Olga Romzaikina qualifying to the final. In the 2nd semi final it was Helene Fruhwirth and Michela Berakova qualifying through.

In the men's it was the Slavik show in semi final 1 with Tomas and Hannes qualifying to the final. In the 2nd semi it was Quentin Derbier and Jan Svub making it through. Svub had been riding well all day and was stoked to make his way to the final.

So it was final time. In the women's small final Mareike Bohm rode a flawless lap to take the final step on the podium with 5th overall. In the main final Labounkova got the holeshot but in turn 2 Fruhwirth made a great pass to take the lead. Romzaikina and Berakova had a great battle going on in 3rd and 4th but at the finish line it was Fruhwirth from Labounkova and Romzaikina. So finally it was the men. In the small final it looked like course builder Jiri Penc was going to take the win but in an amazing pass in the final turn Dominik Kvapil crossed the finish line in 1st and took 5th overall for his day.

So the men's final lined up. Tomas Slavik in 1, Hannes Slavik in 2, Jan Svub in 3 and Quentin Derbier in 4. The gate dropped and it was Tomas in the lead. The crowd were going crazy. In turn 1 Hannes crashed out and left Jan and Quentin fighting for 2nd. Into the big doubles and Jan made a mistake giving Derbier a clear run into 2nd place. From there the positions held and Tomas Slavik was able to win his race ahead of Derbier and Svub.

After huge podium celebrations, the Jagermeister guys took control and the after party began. With dj's, bands and thousands of happy Czech fans, this race was the perfect showcase for 4X ProTour, the sport of 4X and all the riders.

Thanks to the World's mtb media who supported this event, the live tv, the fans in Jablonec, the riders, the sponsors for this race and most of all Tomas Slavik and his crew for working tirelessly on this project and showcasing to the world that 4X is amazing.

The final round of 4X ProTour is on Saturday October 1st, at Roquebrune in France. The overall title is pretty much in Tomas Slavik's hands now but the fight for 2nd is on with Derbier, Beckeman, Hannes Slavik and Beaumont all fighting. It's going to come down to the wire and you won't want to miss it.

For more information on the 4X ProTour, visit: www.4xprotour.com

JBC Bikepark is located in the Dobrá Voda ski area in Jablonec nad Nisou and offers trails for both amateurs and experienced mountain bikers.