The London Bike Show returns to London’s ExCeL from February 23 - 25, 2018, promising a celebration of cycling and a great day out for cyclists and anyone looking to get more active on two wheels .

Taking place at this year’s London Bike Show, the Air to the Throne, a freestyle mountain bike competition will return for a third year, with the final taking place on Sunday. 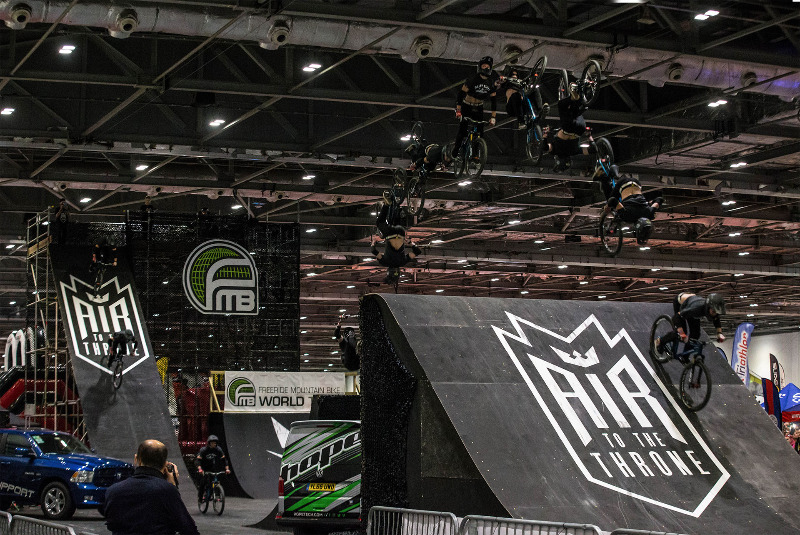 This year’s competition will be bigger and better, with a huge course which promises to test the riders to the limit. After two successful years of growth, the event has also been awarded Gold FMB World Tour status in 2018. This will be the first time the UK has hosted a competition of this level, and means riders will be competing for a prize purse of €15,000.

An international field consisting of the World’s best riders, including British Number One Matt Jones, and two-time Air to the Throne Winner and World Number one Nicholi Rogatkin, will be putting their bodies on the line, performing high-flying tricks to the awe and bewilderment of spectators. A 40 rider strong field will take place in the competition, with riders being announced in the run up to the event. Tarek Rasouli, FMBA’s Vice President said, ‘We’re thrilled to be partnering with the London Bike Show to take some of the world’s best FMB riders to the United Kingdom for the first FMB Gold event that has ever been in the UK. Especially during the winter it is really great for the athletes to get the chance to show their sickest tricks on an indoor course!’

For the first time, the competition will be streamed live on UNILAD, giving visibility to fans across the globe.

Advanced tickets to the London Bike Show are now available (including entry to watch Air To The Throne), with adult tickets priced at £16.00. A ticket to the London Bike Show will also gain visitors entry to the Triathlon Show: London and The Telegraph Travel Show. Concession tickets are available for £10.00, children 8 and under are free and 9-16 year olds cost £4.00. Booking fees apply per ticket.

For further information and to purchase tickets please visit www.thelondonbikeshow.co.uk/airtothrone