There's an incredible vintage feel to Llangollen, with its famous steep tracks hosting Downhill races since 2009, and not small races. Hosting the national champs twice in 2011 & 2015, and a national downhill (BDS) round every year from 2009-2017. The list of racers who have won here is a real who's who of downhillers. Josh Bryceland, Danny Hart, Matt Walker, Brenden Fairclough, Gee & Rachael Atherton, Katy Curd, Manon Carpenter, Tahnee Seagrave and even the 1st lady of Enduro Tracey Moseley, who won the National DH Champs here in 2011 before switching to enduro during the 2012 season. 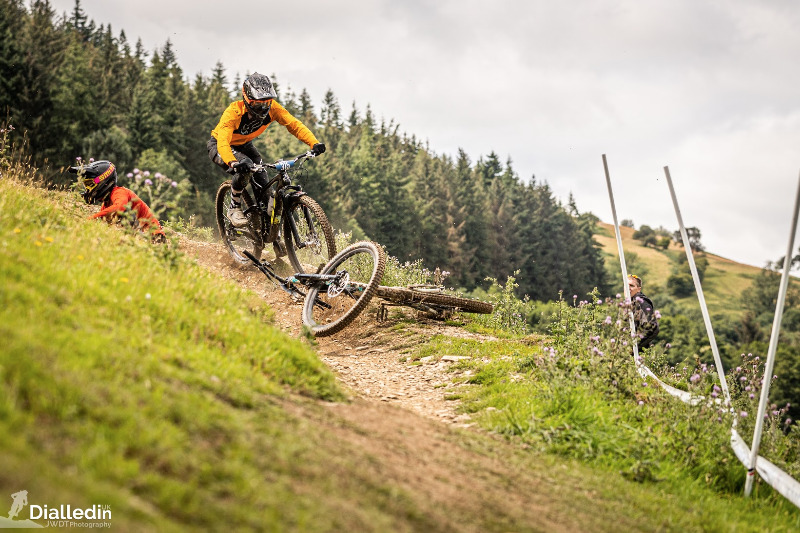 Outside of racing events, you're only allowed to ride these trails if you are a "One Giant Leap" club member, a bargain at only £20/year; or at one of the regular weekend uplifts. The downhill trails at Llangollen have been carved out of the hillside and carefully crafted into some of the finest tracks you can find by the One Giant Leap team. The main ethos is to build and develop tracks that are accessible for all, regardless of ability. All the tracks are challenging that have been built here, but, like the PMBA Enduro events, the main emphasis has been on fun, for riders from beginners to elites alike. Behind the scenes at Llangollen is Martin and a dedicated team of trail builders and maintainers. Martin is the landowner, sheep farmer, trail builder, uplift driver and all round hero to many.

This was one of the biggest events at Llangollen in its entire history. While 400 riders entered the race, the threat of weather kept some away and a few chose not to race after finding out their idea of steep and Llangollen steep are quite different. But I'm sure you'll agree, whether a downhill race, or enduro race it was immense seeing the hill come alive again for a race weekend. Dare I mention the weather? The whole weekend had been threatened by storms, gale force winds and the threats of floods, but this just didn't materialise as threatened. Yes there was rain and wind, but not nearly as bad as the forecasters had predicted. This was an incredible blessing when you think of the hardships that have faced the likes of Ardrock and the Malverns Classic. 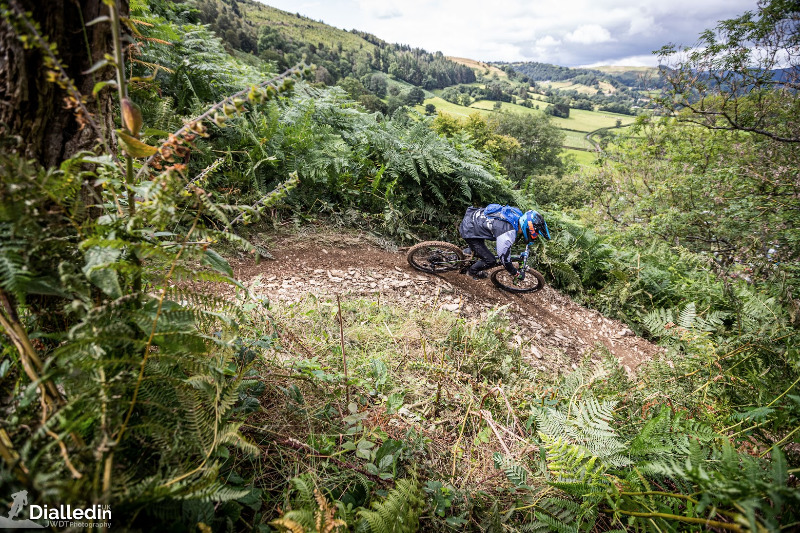 Probably the toughest event I've done this year. They delivered 3 cracking stages with a mash up format. As the tracks dried throughout the day the times got quicker and quicker — Ian Austermuhle

This was a bold move for organiser Kev. Llangollen is well known for its steepness and downhill style trails. But with Kev's experience and vision it was clear what had to be done. In order to host an Enduro race at a downhill venue Kev had to put in some mid stage climbs. The reason for doing this was to level the playing field so that people with downhill bikes, potentially quicker on the steep and technical bits, would then have to negotiate uphill sprints, more suited to enduro style bikes. Also, literally every rider had to push up large sections of the hill to get to the top to race back down. It was a tough day on and off the bike. 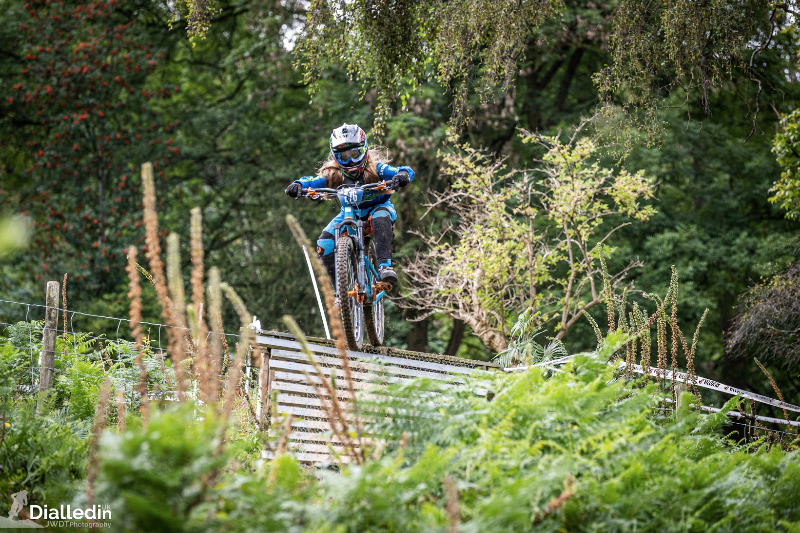 the most challenging race I’ve done so far but it was absolutely sick! Awesome event. Can’t wait for next year..........everything hurts—12 year old Hollie Vayro

Not only was this a new venue for the PMBA Enduro Series, but also a different race style. Though it was still an enduro, it was a mash up across 3 stages. Race all the stages, in any order as many times as you can and then it's the best times that count. With all 3 stages finishing in the bottom field, riders could live check/update their timing chips and assess their progress or positioning.The 3 stages, (1) Esquilo, (2) Main Line and (3) The Steeps. All of the stages had rollable features and also alternate lines available.
There are 12 categories in a PMBA Enduro Series race (that includes hardtail), so too many to comment on here, but a full rundown of all the results can be found on roots and rain. 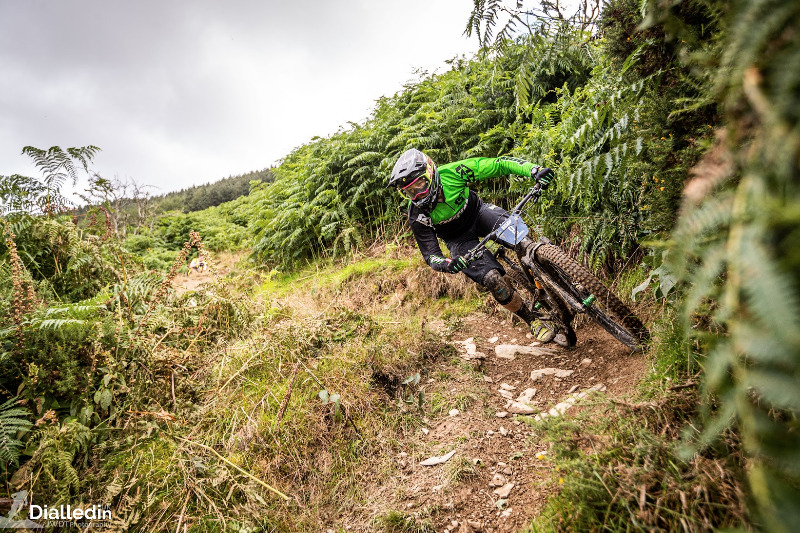 This was a cracking weekends racing. With Saturday providing an optional practice for some brave enough the chance the weather, costing just £10 to cover the costs of marshals and medics, the rest of the money raised helped make a donation to the North West Air Ambulance Charity as part of the 2019 #RootingForCallum appeal. The whole weekend had a great buzz and vibe. With the event centre and parking right at the bottom of the hill, many riders were able to refuel with liquid and carbs, fix their bikes and not have to carry spares and nourishment around the course. Put it in your diaries for next year (8th August 2020), it will be bigger and better. The plan will be for 5 stages! 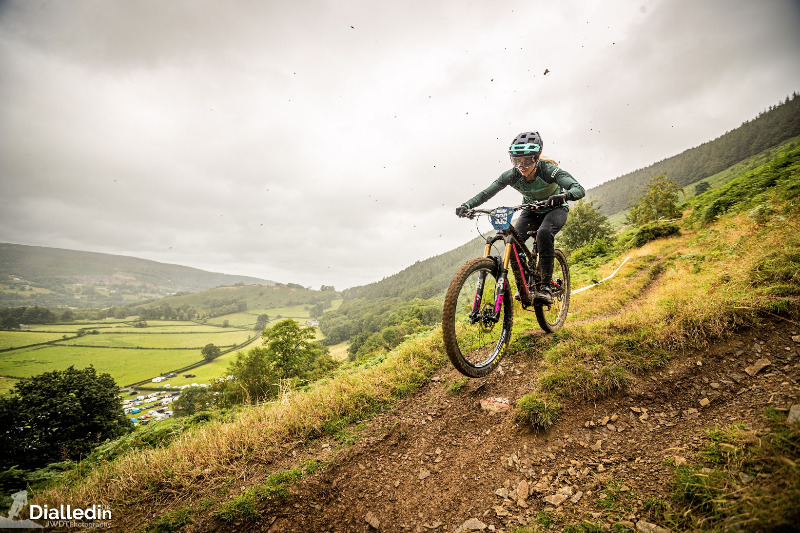 A proper enduro with hard climbs and even harder descents! Great fun in some sketchy conditions! Loved it! - Meg Whyte

Next up for the PMBA Enduro Series is round 5 at the amazing Kirroughtree trail centre in Scotland. This one is definitely not to be missed. A great weekend to drag the whole family to and even a FREE kids race on the Saturday, it's all about getting them started young! For more information head over to their website here or facebook pages here for more information.

Until next time, stay rubber side down!

Llangollen downhill mountain bike trails in North Wales are built to test even the most skilled riders and can only be ridden by One Giant Leap club members.