We're now midway through the 2019 Hope PMBA Enduro series and its been non-stop action all the way. As the dust settles on a dry weekend in the hills above Bacup, the tape has been collected and the event packed away and we can reflect on another superb weekend of racing. The PMBA team put on another two-day event, with a full day of practice followed by a day of racing. This event is a strong contender for a season favourite among the riders, featuring 6 stages split over two very different locations. The technical trails and jump park features of Havok Bike Park offer a very different challenge to the fast and often peddly Lee Quarry. 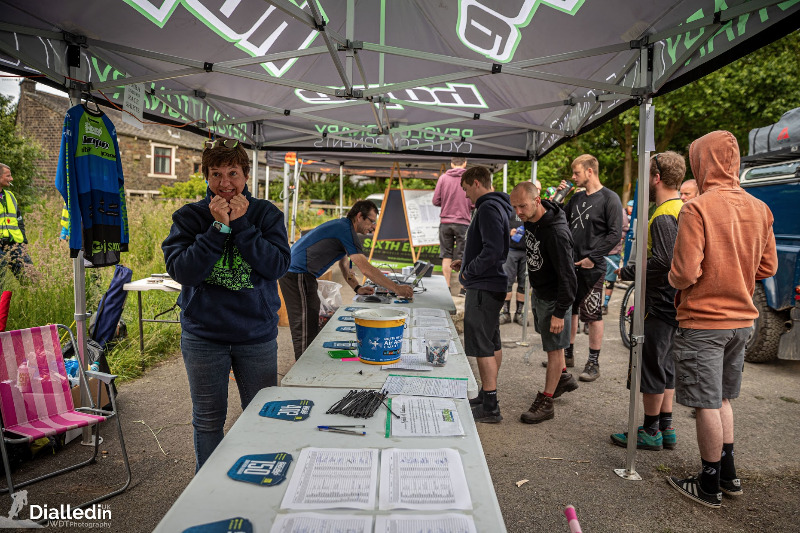 With Kev choosing to highlight the work of the volunteer PMBA trail association through the enduro series this round is very special. Lee Quarry is PMBA's central and original venue, and PMBA were also key in getting the local riders in a position to transform some popular but illegal trails into a legal bike park and what has become Havok Bike Park! So with the enduro using both venues it really is the PMBA Enduro! Every round of the 2019 series has been a sell-out and record entries, and this was no exception, smashing the previous best entry by 50 and that was only made possible by more parking space acquired for those entries. 425 entries, with a wealth of young talent at 25% of the entries from U21's it's encouraging for the future of the sport. Starting at Lee Quarry the riders make the climb to a high point of the quarry with incredible views over the countryside, before dropping into a series of fast berms. The trail was running sweetly so the pace was high. The wind was definitely a problem up at the top of the course, with the experienced riders keeping it low and safe. More than a few riders played for the cameras and missed their landings as the wind took them off course. After the riders drop down into the quarry "bowl" the track becomes an off camber grass trail where the wind was definitely still a factor. Finally, a quick sprint down a straight trail, a huge sweeping berm and a blast through the woods and stage 1 is done. 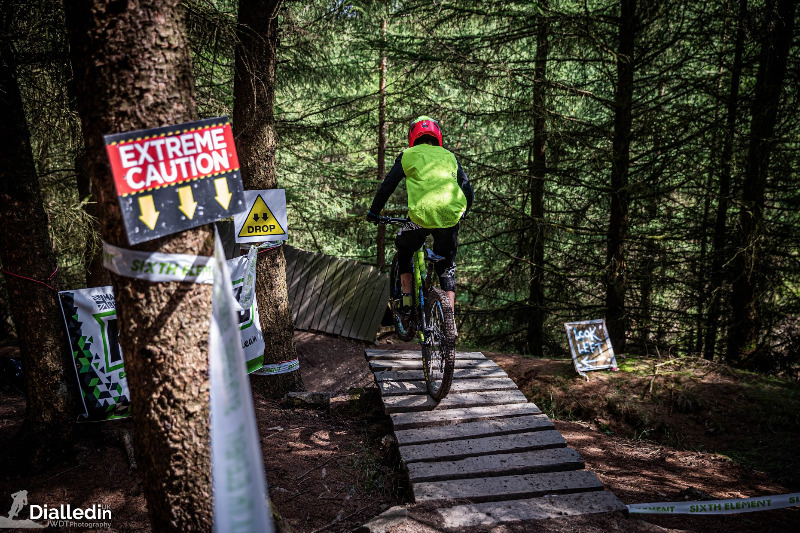 With the legs now warmed up the riders transitioned across the top of the quarry to stage 2, Janduro at Facit. This stage starts high up in the trees it featured a narrow off camber chute, into a fun flowy bench cut trail with hips, hucks and rollers. The midsection features an evil rocky uphill section after a long straight sprint. The lower section returns to the steeps, with a rocky and loamy trail twisting through the trees. The stage is fast and mostly flows for those in control, which was thankfully dusty thanks to the break in the evilest and wettest June's for years.

The big transition across the moors is a unique part of this event, climbing up and passing through 3 windfarms its no surprise the moorland drag can get windy, but the views are superb as you traverse the Lancashire/Yorkshire border. Your reward, however, is hitting Havok Bike Park. Three stages here, totally different from those at Lee Quarry. Here we have dark, enclosed, pine forest trails. Plenty of loam and claggy tyres, technical sections, wet roots and steep descents. Throw in a bucket load of tables, drops and senders and you know you are up for some serious fun! The Havok dig teams have constructed some epic trails which demand a high level of respect. Stage 3, Beasted, features a rock garden which can be gapped by the brave before riders are treated to a fast wood section with a gnarly drop into a berm. The race goes BIG with stage 4 (HAVOKARADABRA). Featuring some fast berms, "that" table, clearly the biggest feature of the weekend, and the aptly named carnage corner, you really have to be at the top of your game to nail this stage. Hope Factory Racing's Ian Austermuhle took the fastest time on this stage by almost 3 seconds.

PMBA's round at Lee Quarry/Havok Bike Park has a real mix of trails. Its a chilled event but there's no room for errors between the tapes so I was really happy to take the overall win on my new Hope HB160-Hope Factory Racing's Ian Austermuhle 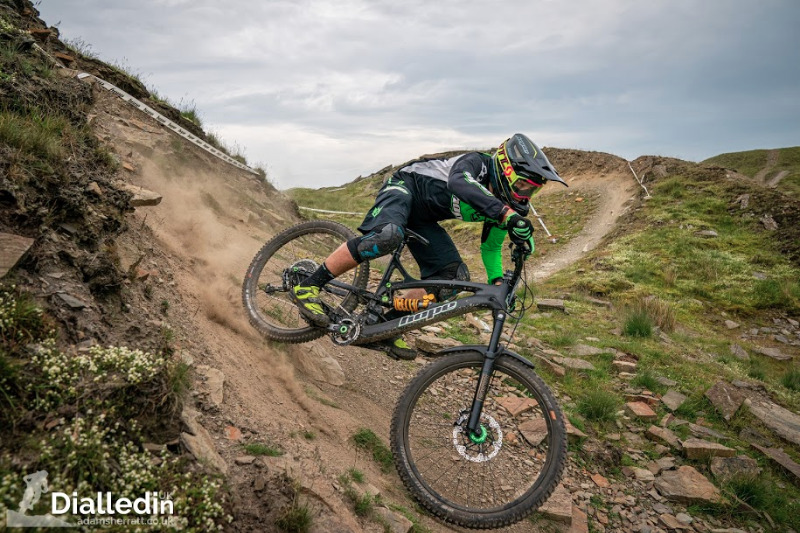 Havok's final stage, Ride Free, features some of the parks free ride sections. This is a really fun challenge, and certainly, one to practice multiple times. The final 200m include the small matter of a sender that turns a bridge into a gap jump, hip jumps round trees, off camber tight turns, doubles (including one into a berm), a huge drop that turns straight into a wall ride and over the finish. Rose Tempest was the fastest female rider on this stage and went on to take the overall category and fastest lady. On taking the win Rose said...

It was so cool. There are some really fast girls racing and I was really suprised to take the overall womens. Lee Quarry and Havok both offer completely different trails, making it a really fun and varied race. I had a great time racing there, as with the series so far. The tracks and bike feel amazing!—Rose Tempest (Female Riders)

Departing Havok the riders take an urban transition through Bacup and back to Lee Quarry for their sixth and final stage of the weekend. Back to the top of the quarry for another blast down the gravel. Stage 6 is the longest stage of the race, sweeping berms taking the riders to a peddly 100m full of rocks before dropping in to the infamous Hecklers Chute. The chute has the ability to sort the winners from the losers. Stopping here is fatal to your race time as getting started on the steep slope is near impossible, not to mention the fact that the crowds are merciless! A foot down is rewarded with some sharp words! The last chance to show off your airborne skills through the jump park and then a quick sprint through the woods to the finish. 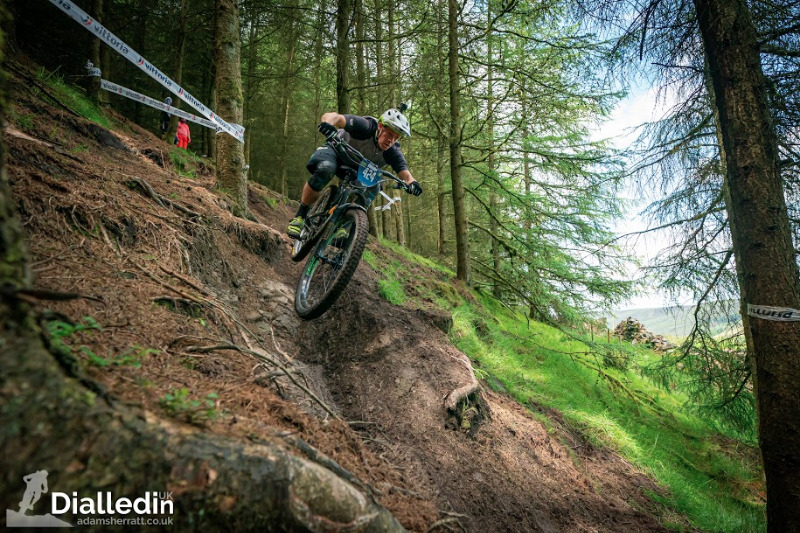 This wraps up the race report and the first half of the season. PMBA enters it's summer break, with a well-earned rest for the organiser, the event team and the marshals. The series returns in August with the race going to Llangollen for the first time. With 3 huge downhill style trails, run as an enduro mashup, the racing promises to be epic! With entries still available, there's no excuse not to get involved! For more information and to sign up to the the next rounds, DO NOT DELAY, so far every round has sold out with large waiting lists to enter when all the slots are taken. Sign up here. For more information on the series follow their facebook pages. PMBA Enduro is super proud of their ambassador program, picking up young talent and encouraging and helping them onto better things. The youngest of the ambassadors is Lethal Leah, just 13 years old and 7 races under her belt. This event showed her progression so well, the closest to Rose who won the category again, just 22 seconds off the pace. The speed has also pushed Rose forward too, in keeping Leah behind she landed "Fastest Woman of the Day" beating some experienced and fast racers in the senior, master and U21 women's cats, and overall wins on stages 1,2&5. Leah was actually 4th fastest overall women, bagged 2 stage wins in category, and one of those a fastest woman on Havok's stage 4! PMBA Ambassador Abi Lawton topped the senior womens podium and was fasted overall on the final stage. With PMBA Ambassador Tom out of action with a broken arm, the girls turned it on with their best performances of the year.