The event took place over two days, with course practice and timed qualification runs taking place on Saturday 29th September, followed by the main event race on Sunday 30th September. Katie Wakeley was the first down the course, closely followed by Francie Arthur and Stacey Fisher. 200 riders made it down the course with Rachel Atherton managing to catch 39 riders and finished in 40th place.

The female riders, the hounds, took on a purpose built, 2km technical course in a bid to outride the Fox and the best downhill racer in the world, Rachel Atherton. The hounds were released with a head start shortly followed by Rachel Atherton, who was challenged to overtake as many riders as possible. The winner, Katie Wakeley was the first rider to reach the finish line. Riders had to race over open grassland, woodland berms and technical rock sections before the sprint to the finish field.

Katie Wakeley rode to victory in 02:59.75. After the race she commented “This is my first time doing it [Red Bull Foxhunt] so I’m really pumped to be here and riding. The format is awesome! It’s the first time I’ve ridden an event like this – it’s a one-off mass-start race. I’ve had a really good weekend and the weather has been so good this weekend. It feels amazing to win”.

Five time World Champion Rachel Atherton said “It [the atmosphere] was so cool! What an absolute buzz! Everyone has the best run and I was coming down and all the girls were riding so well. They rode the best they’ve ridden all weekend. The atmosphere at the finish was 100% stoke. We would all go and do it again immediately if we could. Loads of people have stepped up and raised their comfort level so yeah, I’m really proud of everyone”. 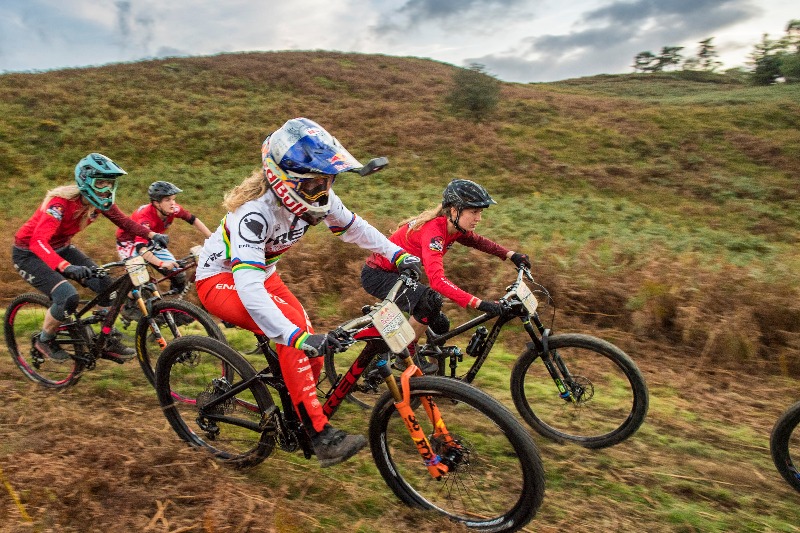 She went on to add “It’s been a perfect weekend with the sun and the track is perfect with loads of line choice up there. Everyone has really pushed themselves and has massive smiles on their faces”. Atherton, who is now the most decorated downhill mountain biker of all time, is involved in Red Bull Foxhunt as her way of supporting the sport at a grassroots level. The event’s aim is to encourage more females to ride bikes and ultimately get involved in racing at both entry level and on the racing circuit. Now in its fifth year, Red Bull Foxhunt provides first time experiences of racing for women of all ages and skill levels showing that females can start to race mountain bikes at any age.