The sixth edition of Red Bull Hardline - recognised as the toughest downhill event in the racing calendar - took place in the hills of Dyfi Valley in mid-Wales. Bernard Kerr took the win in front of a sold-out crowd of  3,000 spectators. The podium was completed by fellow British Riders Gee Atherton and Joe Smith.

Saturday’s qualifying took place on a near-perfect track, in bright sunshine. The track was fast and dry. Bernard Kerr dominated qualifying with a time of 2 minutes and 50 seconds with the defending champion Gee Atherton not far behind in second place with a time of 2 minutes and 52 seconds. The remaining top five qualification spots were taken by Charlie Hatton, Joe Smith and Brendan Fairclough. Fairclough put in a very confident and aggressive run executing a perfect flip on the Step-Up without losing any time through the section.

Fast forward to the final and the weather was misty and gloomy, a totally different ball game for the riders to take on, giving poor visibility in the top section of the track all the way to The Cannon. After the third rider dropped in, the wind picked up adding an extra element to the course. 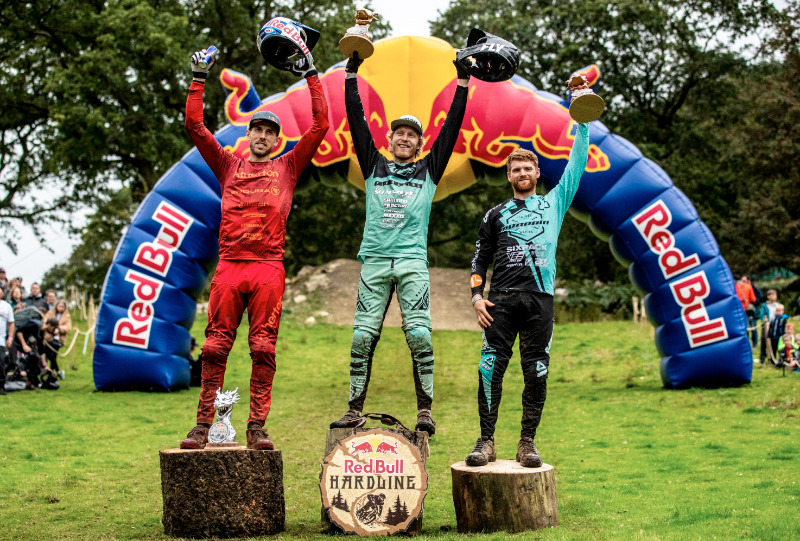 The track remained mainly dry but as finals progressed some of the rocks still posed a slippy obstacle to overcome, which caused some riders to come off in the open technical sections including former World junior Champion Kade Edwards, Charlie Hatton and Kaos Seagrave. Seagrave nailed two backflips out on course, including at Waterfalls Edge, which has one of the narrowest landings on the course. He then went on to take another tumble before walking his bike down the Road Gap and the remainder of the course.

Joe Smith’s incredible run saw him go into the lead, with just three riders left to drop in, but it wasn't to be his year. A rear tyre puncture forced him to go round the final jump losing a vital three seconds. Gee Atherton, last year’s winner then went into the lead, with a fast but messy run, by 2.5 seconds with just one more rider to drop in. 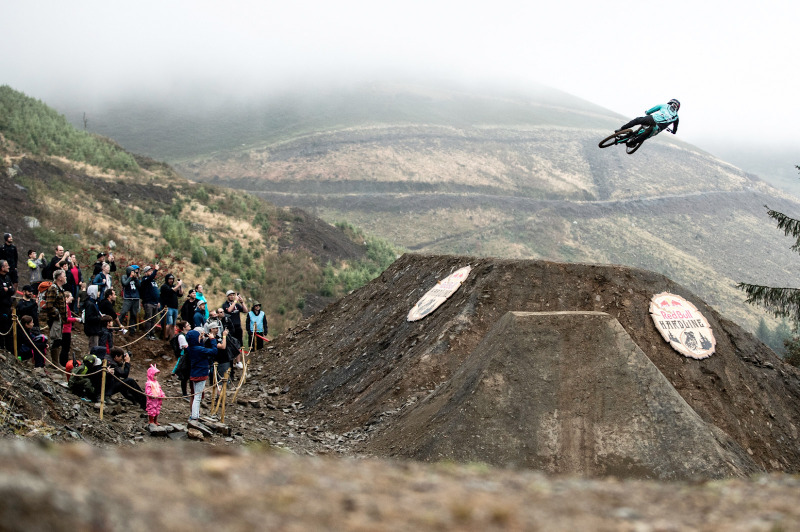 Last to ride was the fastest qualifier and 2016 winner Bernard Kerr. He attacked the course, with clean lines making up speed on the open sections, where other riders crashed. He raced into the final section, making time on Atherton. Kerr crossed the line and became the first rider in Red Bull Hardline history to claim the title twice.

The runner up Gee Atherton commented. “It was a tricky day. The rain rolled in, the mist rolled in and we went back to classic Red Bull Hardline with dark, welsh conditions which always makes for a tough race. I enjoyed it, I pushed on I had a few slips on the run, but It wasn't a bad run. It was scrappy up at the top, the wind was, blowing. Bernard showed that there was time to be made out there and he took it from me.  When I came in through the last section, I wasn't sure if I had done enough. When it's dry you tend to have a much better idea of how it's going, but in the wet, you could come first, you could come tenth because the run is so hard.

He went on to add, “I’m pleased with second. It was so hard out there today and difficult just to stay upright. Gutted to not retain my title, but at the same time in stoked for Bernard. He deserves it. He's been to every one of these events. he suits these conditions and he rode well today.

2019 winner, Bernard Kerr said “It went very well, I won! I know it was a tough day with all the weather and other things and I was trying to carve new lines but um yeah I pushed on. For some reason, I found it easy to focus today. There were a couple of good ruts, there was one turn with a huge hole in it that I almost went over the bars on that everyone hit in practice so that was a bit worse but I dropped in last and I like dropping in last, I’ve done it a couple of time so yeah, it was pretty cool.

He went on to add “Winning twice is unreal, yeah. I think I just really wanted to win so and I broke my hand a few weeks ago so I missed half the season. it just makes me feel really good after missing races and knowing I was going quick this year, to come back and win it.

Built by local legend Dan Atherton, the course combines tricky technical downhill features with huge freeride-style jumps. Red Bull Hardline tests even the most skilled riders, with giant slab rolls, tight wooded sections, the iconic road gap jump (with a trajectory of 55 ft) and other epic jumps which will test the riders at speed as they enter the final section of the course. The final fly off, which is the biggest jump ever at Red Bull Hardline, see’s riders fly 65 ft (the length of a football pitch) as they speed towards the finish line.