5 Things We Have Learned from Maribor

What a start to the World Cup season! The Mercedes-Benz UCI Downhill Mountain Bike World Cup in Maribor delivered high speeds, drama, plenty of action and some of the closest mountain bike racing ever seen. Here are some of the highlights of the first World Cup of 2019: 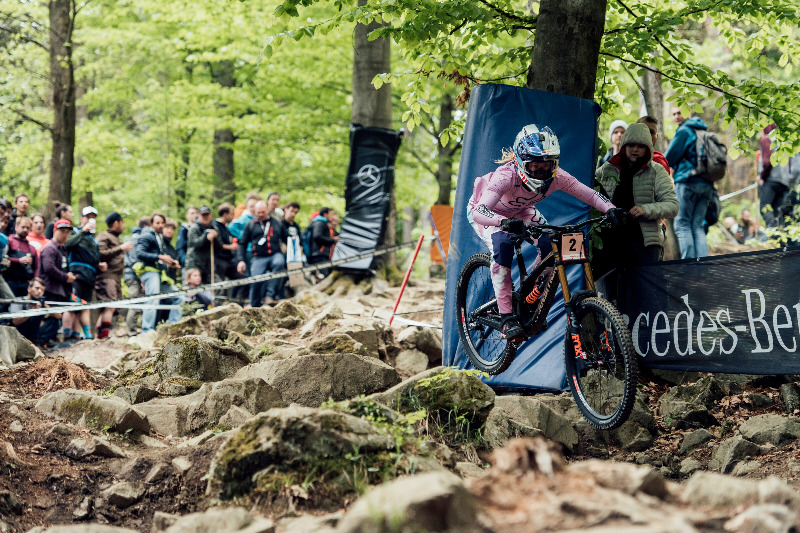 Weather, drama and a great track – Maribor delivers the goods

Nine years after the last World Cup race in Maribor, the immensely popular Slovenian venue played host to the first race of the 2019 World Cup season and what an opening round it was. The rider-favourite ‘Black Line’ challenged riders with relentless roots, a fearsome, long rock garden and most of all, incredibly high speeds. After a week of sunshine and warm temperatures, the weather forecast for the weekend looked gloomy and true to the forecast the heavens opened just in time for qualifications, turning the track into a slippery ice rink and providing a healthy dose of drama. The slick track claimed countless victims in qualification, most notably Greg Minnaar (RSA), who after a crash didn’t qualify for the first-time in 20 years, but by Sunday the Sun prevailed to everyone’s surprise and riders were greeted by a drying track and thousands of Slovenian fans.

Spurred on by the noise of the thousands of fans lining the drying track, the first World Cup of the year saw some of the tightest racing in world cup history. After a mediocre qualification run, Danny Hart (GBR) took to the track early and enjoyed a long stint on the hot seat and watched rider after rider come close, but just failing to beat his time. It wasn’t until 2018 UCI World Champion Loic Bruni (FRA) blasted out of the start gate that split times showed up green. Bruni eventually beat Hart by less than 0.5 seconds and nervously watched the last eight riders come down. In the end, in an absolute nail-biter of a final and one of the closest races to date, the Top 4 men were separated by less than one second and the Top 10 by a mere three seconds.

Missed the incredible action from Maribor? Fear not! You can re-watch the entire live-broadcast and all the highlights of the first stop of the Mercedes-Benz UCI Downhill Mountain Bike World Cup on-demand and anytime on Red Bull TV!

Seagrave and Atherton battle it out at the top, close fight for the podium

After Myriam Nicole’s (FRA) injury prior to the start of the season, many expected the race in Maribor to start with a battle between British riders Tahnée Seagrave and Rachel Atherton. In qualifications, it was however Tracey Hannah (AUS) who came out on top nearly 2.5 seconds ahead of Atherton in second and over four seconds ahead of Seagrave. On finals day though, the anticipated battle of the Brits was truly on with Atherton and Seagrave riding in a league of their own. In the end, Seagrave narrowly edged out Atherton to take the win and, for the first time, the leaders jersey. While Seagrave and Atherton may have lived up to expectations, the rest of field has however crept very noticeably closer, with Hannah in third only 2.6 seconds off the winning time and the Top 6 all within six seconds.

The young guns are on the charge

After years of dominance by veterans like Aaron Gwin (USA), Greg Minnaar or Rachel Atherton, Maribor saw a true surge of the next generation. In the Men’s Top 10, seven riders were 25 or younger, while the Women’s Top 6 saw only two riders older than 25. The unofficial award of ‘break-out ride of early 2019’ has to go to 21-year-old Charlie Harrison (USA) and second-year Elite rider Matt Walker (GBR) though. Both showed fantastic pace and finished in 4th and 5th place respectively. Will the charge of the young riders continue at the next round in Fort William or can the veterans strike back again?

The debate over which wheel size is faster has been raging on and off for several years. After most of the men’s field settled on 29ers by 2018, a rule-change by the UCI allowing different wheel-sizes on the same bike has thrown another option into the mix for 2019. Maribor was the first World Cup in which the new rule came into effect and, adding fuel to the wheel size debate straight away, Loic Bruni and Danny Hart took first and second place on bikes running 29-inch wheels in the front and 27.5 in the back. Third place however went to Troy Brosnan on all 27.5 and 4th and 5th finishers Harrison and Walker ran 29ers. Will more teams jump on a 29/27.5 combination throughout the season given the early success? Is there a ‘better’ wheel size or does it come down to personal preference? One thing is for sure, the heated debate will continue.

Re-watch the entire live-broadcast and all the highlights of the first round of the Mercedes-Benz UCI Mountain Bike World Cup on-demand and anytime on redbull.tv. Get the latest on everything bike related on the Red Bull Bike Channel at redbull.tv/bike.