The fifth edition of Red Bull Hardline - recognised as the toughest downhill event in the calendar - took place in the hills of Dyfi Valley in mid-Wales with local rider Gee Atherton taking home the trophy for the first time after a nail-biting final in front 3,000 spectators. Bernard Kerr came in second with Charlie Hatton in third.

Twenty riders took to the start line on Saturday for qualifying in wet conditions. The weather and the long technical course proved difficult for some riders to handle with last year’s winner Craig Evans, Adam Brayton and Brendan Fairclough all failing to qualify for the final. Gee Atherton was fastest down in qualifying with a time of 3:15.937 followed closely by 2016 winner Bernard Kerr. Young gun Kade Edwards made his first ever Red Bull Hardline final by taking the last spot. The battle between the top three was intense in the finals, with Trek Factory Racing's Charlie Hatton setting a blinder of a run, putting the pressure on Kerr who was to follow him. At each split, Kerr was building up time against Hatton and came in five seconds ahead of him. Gee Atherton was the last man to drop in, and the crowd grew louder and louder with each split time he set. In the end, Atherton took his first ever Red Bull Hardline win.

Speaking of his win, the two time World Champion said: “Hardline is tough, the guys all pushed really hard. I didn’t look at the times before I went down for my final run, I knew the track was drying so just chilled at the top and waited. The first section was good but I was getting tired and fatigued but I sent it off the road gap with no feet clipped in, went into the turn and just push on into the wood. I felt good at the end of the season, had some great results but I’ve had my heart set on this for so long. I’m so happy.”

The runner-up Bernard Kerr commented: “It was good, I tried really hard. I almost threw it away a couple of times with two big mistakes. Gee smoked us all with that last run. I was gutted not to win but so stoked for Gee to finally win, so happy to settle with second.”

The intense course, built by older brother Dan Atherton, combines tricky technical downhill features with huge freeride-style jumps. Red Bull Hardline tests even the most skilled riders, with giant slab rolls, tight wooded sections, the iconic Road Gap jump (with a trajectory of 55 ft) and some new epic features which test the riders at speed as they enter the final section of the course. The Final Fly Off, which is the biggest jump ever at Red Bull Hardline, sees riders travel 65 ft as they speed towards the finish line. 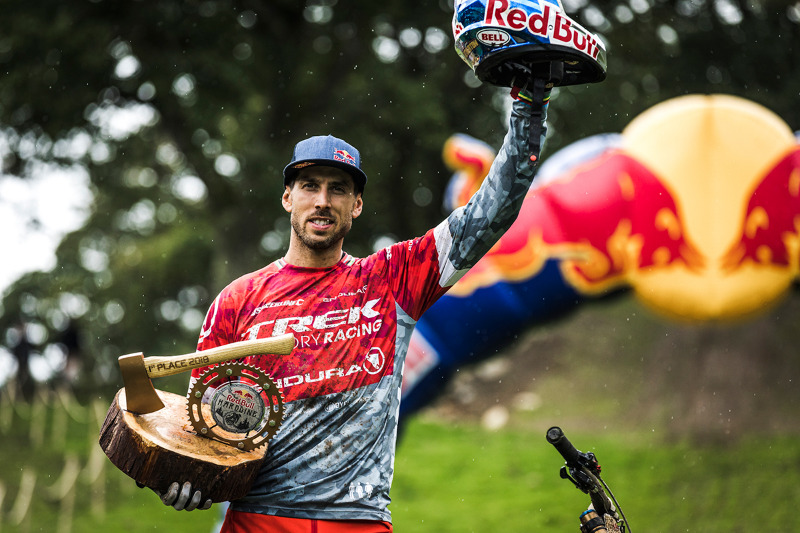 Red Bull Hardline took place on 15 September, for more information please visit redbull.com/hardline. Watch the action on Red Bull TV at 6 pm UK time on 16 September. Greg Minnaar, the most successful downhill mountain biker the sport has ever seen will be providing commentary alongside Rob Warner in the commentary box.