Voted one of MBR magazine's top 10 descents in the country in 2005, this trail is totally different in character from the natural tracks at Innerleithen. It's wide and fast, stacked full of jumps, drops and huge flowing berms – big grins guaranteed!

Confidence with jumping at speed will help get the most out of the track, though first time down and for those less comfortable jumping, we recommend that you keep your speed under control and your wheels on or close to the ground (most features can be rolled through).

From the start a series of gentle turns leads into several steeper, tighter banked hairpins. Carrying some speed out of the last one sets you up nicely for two floaty double jumps. Catch the right hand berm and you’re at the upper road crossing.

Off the road, the trail falls steeply away. Momentum gained, you’re quickly onto a series of jumps in quick succession. Keep it low through these and you’ll have the speed needed to clear the final big double jump. The trail then flattens for a while before breaking out of the trees.

Over 25 jumps are packed into the next section, which dives and weaves down the open hill through big ‘g-outs’ and bermed corners. Tabletops, doubles, hip jumps, step-ups and step-downs all feature. A little way down, there’s an optional section, Diks Dinnerparty. Here the jumps are bigger still and upramps even steeper. Enjoy!

Crossing the lower road, the final section is shared with the infamous Caddon Bank (part of the XC Route). Negotiate a couple of rocky steps and you're onto the first of three (optional) rock drops in a row – the third is the biggest at nearly 4ft, though the trail falls away steeply allowing for some considerable air time!

Round a 180 turn, over a cheeky rock step and it’s into a series of 10 big rollers – like being on a rollercoaster, but on your bike! Check contents of stomach are intact, then it’s across a bridleway and into the lower section.

Down a rock chute and over a couple of smaller jumps you soon pick up speed. Two small rock drops fly quickly by then it’s into a big 180 turn, through some massive bombholes, then three doubles back to back. From here, things can get ridiculously quick over several wide step-downs, the last of which fires you into a big tabletop.

Through two turns, then a couple more rock steps follow. Off the brakes here, pedal hard and you’ll clear a step down into a flippin’ huge bombhole, which spits you out over two more tabletops. Two final turns, a couple of jumps and you’ve made it to the finish!

211 points earned on this trail 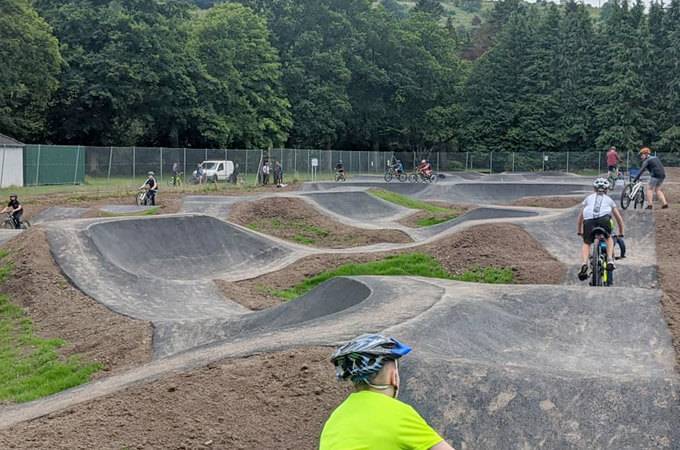